Lester Dent was the creator of the classic pulp-fiction hero, Doc Savage, and a powerful story-creation formula, The Lester Dent Master Fiction Plot. I’ve presented it below, fleshing it out where needed with my own commentary.

From here on out, Dent’s words are shown in normal text, while mine are in italics.

This is a formula, a master plot, for any 6,000-word pulp story. It has worked on adventure, detective, western, and war/air. It tells exactly where to put everything. It shows definitely just what must happen in each successive thousand words.

(Lester Dent’s use of “6,000 words” is arbitrary: I used many of his ideas here in my 96,000-word novel, Silver Buckshot, and I’m delighted by the results. I’d add that his formula is handy for mystery, suspense, thrillers, fantasy, horror, SF, and so on.)

No yarn of mine written to the formula has yet failed to sell.

Here’s how it starts:

One of these different things would be nice, two better, three swell. It may help if they’re fully in mind before tackling the rest.

(This, I think, is one of Dent’s most important points. Originality is great, but you don’t have to be incredibly original in everything. Which is just as well, because you can’t. But writing careers have been made on the basis of, “Take Sherlock Holmes, make him a fussy little Belgian, and give him a mustache.”)

A different murder method could be … different. Think of shooting, knifing, hydrocyanic, garroting, poison needles, scorpions, a few others, and write them on paper. This gets them where they may suggest something. Scorpions and their poison bite? Maybe mosquitos or flies treated with deadly germs?

If the victims are killed by ordinary methods, but found under strange and identical circumstances each time, it might serve—the reader of course not knowing until the end that the method of murder is ordinary.

Scribes who have their villain’s victims found with butterflies, spiders, or bats stamped on them could conceivably be flirting with this gag.

Probably it won’t do a lot of good to be too odd, fanciful, or grotesque with murder methods.

(Of course, your story may not have any murders at all, but the principle is the same. The jewels may have been stolen by mysterious methods, or by ordinary methods with something else odd about them. Even if it doesn’t build mystery, it adds interest.)

Different Thing for the Villain to be Seeking

The different thing for the villain to be after might be something other than jewels, the stolen bank loot, the pearls, or some other old ones.

Unique locale? Easy. Selecting one that fits in with the murder method and the thing the villain wants makes it simpler, and it’s also nice to use a familiar place where you’ve lived or worked. So many pulpateers don’t. It sometimes saves embarrassment to know nearly as much about the locale as the editor, or enough to fool him.

(I’d add that it makes your life easier not only to use a location you know well, but also activities you know well: schools, jobs, sports, hobbies, and so on. And I was delighted to learn that, if you’re willing to set your story in the past, it’s especially handy to set stories in the same years as your experiences. You get the zeitgeist for free.)

Here’s a trick much used in faking local color. For a story set, say, in Egypt, the author finds a book titled “Conversational Egyptian Easily Learned,” or something like that. He wants a character to ask in Egyptian, “What’s the matter?” He looks in the book and finds, “El khabar, eyh?” To keep the reader from getting dizzy, it’s perhaps wise to make it clear in some fashion, just what that means. Occasionally the text will tell this, or someone can repeat it in English. But it’s a doubtful move to stop and tell the reader in so many words the English translation.

The writer learns they have palm trees in Egypt. He looks in the book, finds the Egyptian for palm trees, and uses that. This fools editors and readers into thinking he knows something about Egypt.

Divide the Story into Four Parts

(If you’re writing something other than a 6,000-word story, such as a novel, just play along…) 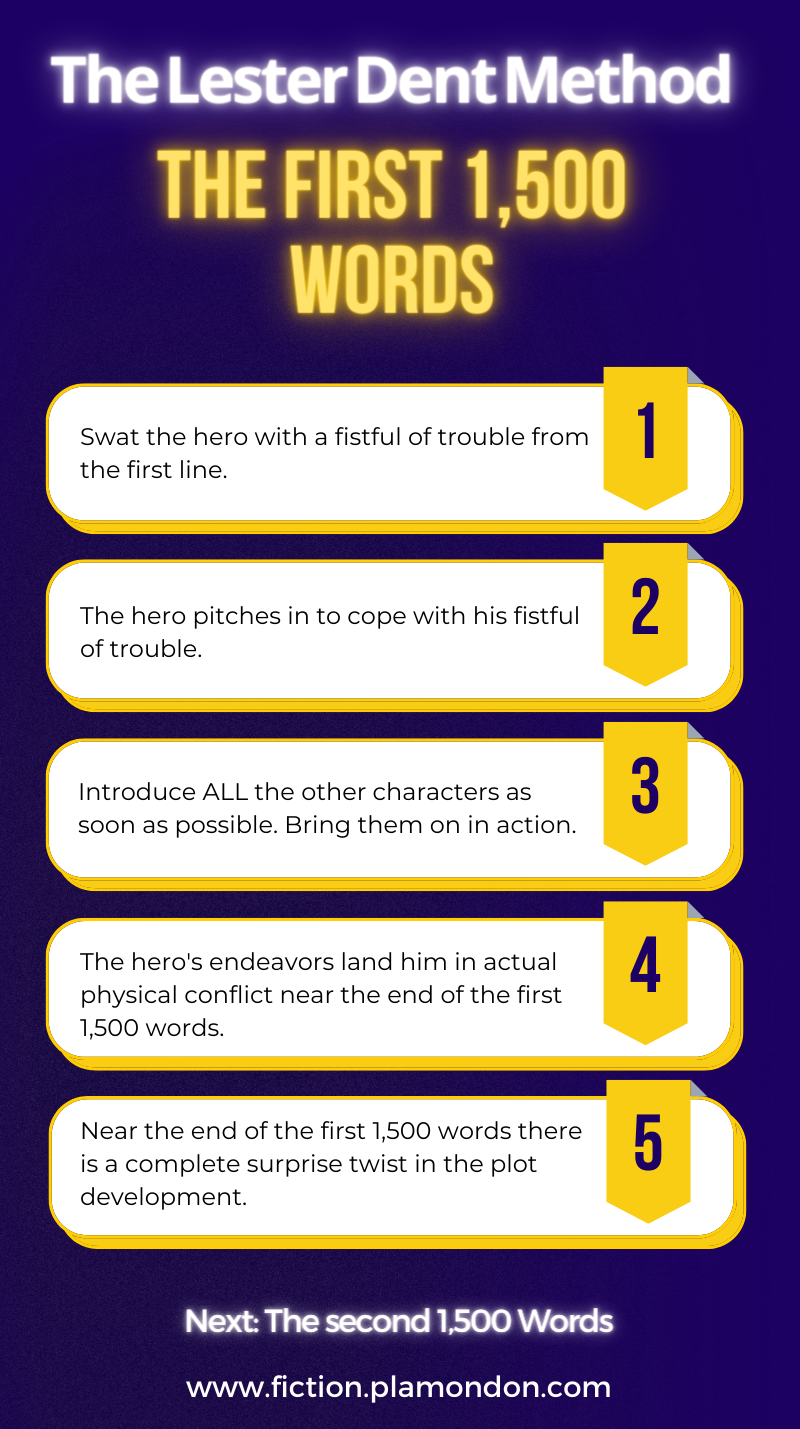 (Welcome to the pulp-fiction mindset! No prologs, no guided tour through a typical day, but straight into a scene that ends (and maybe starts) with Our Hero in trouble.)

Tip: Action should accomplish something.

At this point, it might help to recall that action should do something besides advance the hero over the scenery. Suppose the hero has learned the dastardly villains have seized somebody named Eloise, who can explain the secret of what is behind all these sinister events. The hero corners the villains, they fight, and the villains get away. Not so hot.

The hero should accomplish something with his tearing around, if only to rescue Eloise, and surprise! Eloise is a ring-tailed monkey. The hero counts the rings on Eloise’s tail, if nothing better comes to mind.
They’re not real. The rings are painted there. Why?

(The action should accomplish something, but it’s often far from what Our Hero had in mind.) 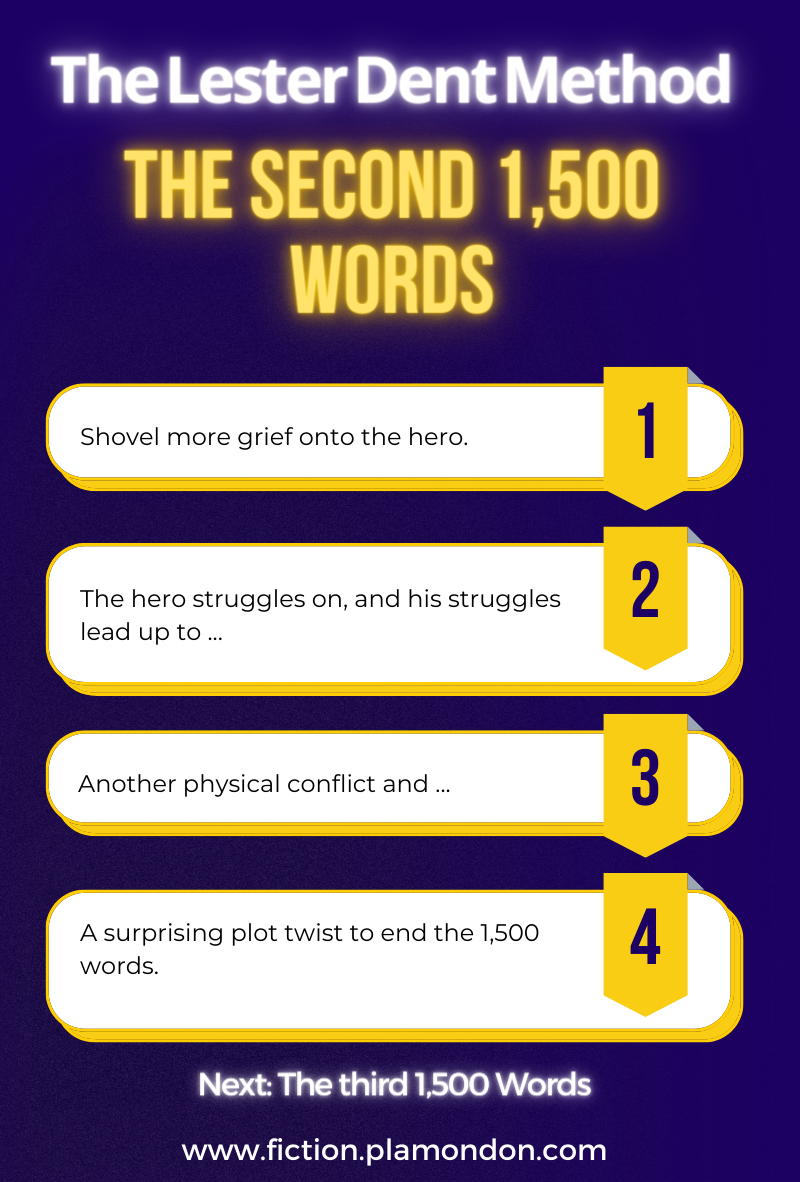 (Readers of other structured fiction methods might be surprised at how the items listed for the second part are practically the same as the first part, but it works!)

Show how the thing looked. This is one of the secrets of writing; never tell the reader—show him (he trembles, roving eyes, slackened jaw, and such). Make the reader see him.

(Keep in mind that Lester Dent is a pulp writer, and when he talks about “showing,” he expects you to do it briskly and clearly. “Make the reader see him” means to make the reader see him in motion, not in slow motion or freeze-frame, especially in an action sequence. Don’t let showing turn into a digression or a puzzle.)

Tip: Put a surprise on every page.

When writing, it helps to get at least one minor surprise to the printed page. It is reasonable to expect these minor surprises to sort of inveigle the reader into keeping on. They need not be such profound efforts. One method of accomplishing one now and then is to be gently misleading. Hero is examining the murder room. The door behind him begins slowly to open. He does not see it. He conducts his examination blissfully. The door eases open, wider and wider, until—surprise! The glass pane falls out of the big window across the room. It must have fallen slowly, and air blowing into the room caused the door to open. Then what the heck made the pane fall so slowly? More mystery.

Characterizing a story actor consists of giving him some things which make him stick in the reader’s mind. TAG HIM.

(Memorable quirks, even if superficial, tend to define characters in the reader’s mind. Harry Potter has a scar, unruly hair, and glasses. Hermione is smart. Ron is … Harry’s friend. His most vivid quirks are shared with his many siblings. His skill at chess is seen so rarely that it doesn’t help much. This puts him in danger of being lost in the shuffle. Never let this happen to your main character! Give the reader something to cling to.)

Tip: Build your plots so the action can be continuous.

(This doesn’t mean that the story should unfold at exactly the same pace. Even short stories have scenes that vary in speed and intensity. I think Dent means that you need a story that doesn’t run out of steam partway through.

One way of keeping the story going is by throwing more obstacles into Our Hero’s path. For example, turning The Three Little Pigs into The Five Little Pigs would be pretty straightforward once I thought of two new kinds of houses for the extra pigs to build. The architectural details might interfere enough with the Big Bad Wolf’s wind-powered demolition to keep the reader interested. But I could hardly do this with The Little Matchstick Girl!) 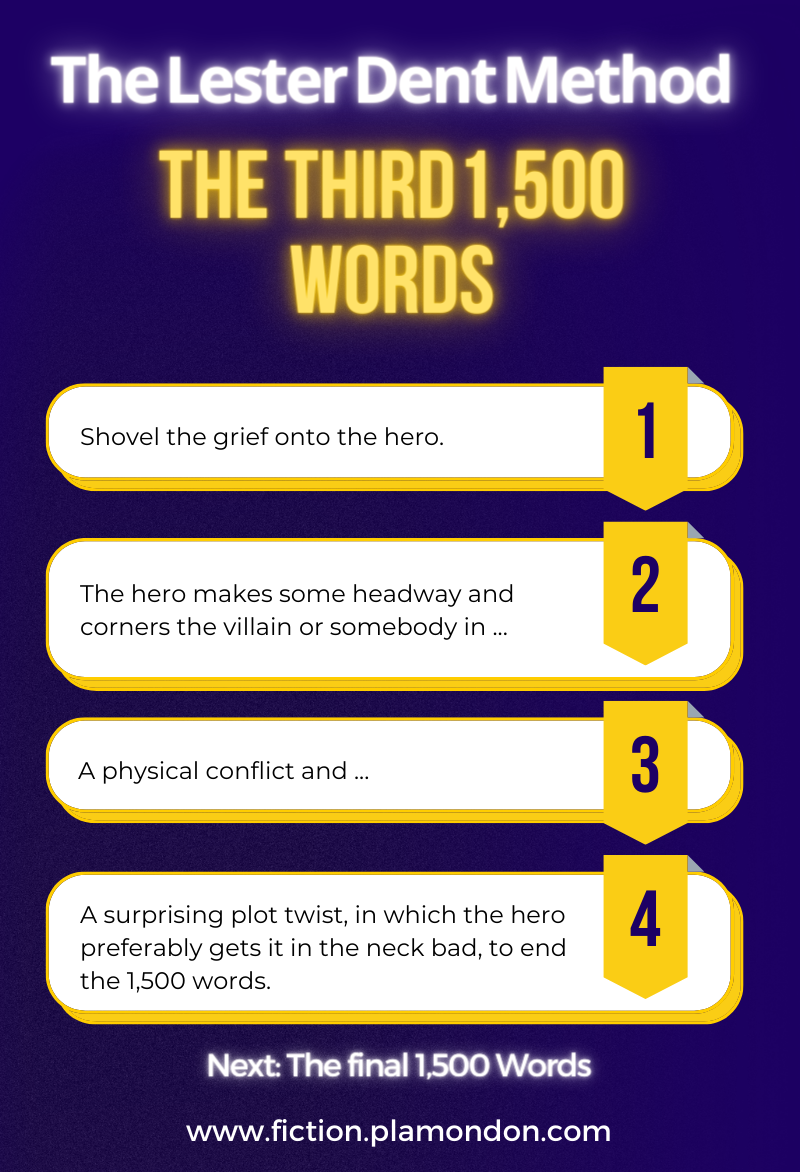 (Yes, this is much the same as the first and second parts, though “The hero makes some headway” makes its appearance here. It’s not that he can’t make any headway earlier, it’s that, now that Our Hero has failed repeatedly, it’s a good idea to show the readers some light at the end of the tunnel so they don’t get too discouraged.)

Tip: Without conflict, twists, suspense, and menace, there is no pulp story.

These outlines or master formulas are only something to make you certain of inserting some physical conflict and some genuine plot twists, with a little suspense and menace thrown in. Without them, there is no pulp story.

These physical conflicts in each part might be different, too. If one fight is with fists, that can take care of the pugilism until next the next yarn. Same for poison gas and swords. There may, naturally, be exceptions. A hero with a peculiar punch, or a quick draw, might use it more than once.

The idea is to avoid monotony.

(For example, in The Princess Bride, the Man in Black beats Inigo Montoya in a jaw-dropping display of swordsmanship, but he defeats Fezzik and Vizzini by other means.)

Tip: Use this checklist:

Tip: The secret of all writing is to make every word count 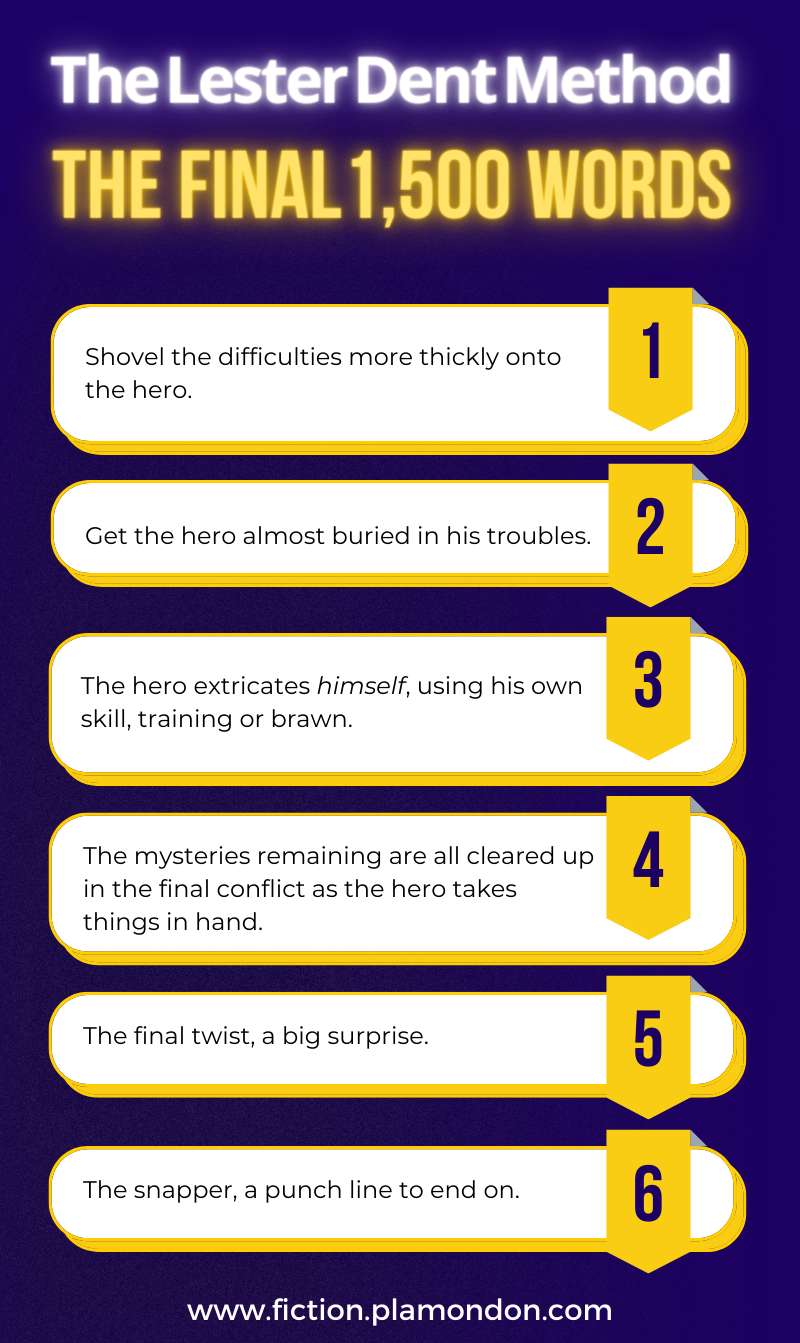 (The last two items on the list are often forgotten. They provide a coda, one that delivers more oomph than victory in the final confrontation.)

This is the briefest useful guide to writing fiction that I’ve come across. None of the steps are mysterious or abstract. That doesn’t mean that accomplishing them is easy, but at least you know what you’re having trouble doing!

When writing longer fiction, it’s best not to take the advice too literally. A novel has more elbow room than a short story. I, for one, make no effort to introduce all the characters near the beginning, Each phase of the story tends to bring in new characters. This seems inevitable for longer stories.

I also don’t divide my novels into four parts. I work and think in terms of chapters. My chapters don’t all have physical conflict (or its equivalent), either. But that menacing dark cloud is always there, sometimes closer, sometimes far enough away to give a brief sense of false security.

Even very long works can have that dark, menacing cloud. I remember how it felt to have it hanging over my head practically the whole time I was reading The Lord of the Rings for the first time when I was twelve.

Give it a try and maybe let me know how it turned out in the comments!

And feel free to share this with your friends, and maybe take a look into my pulp-fiction adventure, Silver Buckshot.