A lot of writers feel like imposters, and not in a good way, like Rudolf Rassendyll in The Prisoner of Zenda. What to do?

Imposter syndrome, obviously, is when you feel like an imposter without actually being one, or at least not on purpose. It not only makes writers feel bad, it makes them hesitate to share their work with readers—the ultimate artistic tragedy! Again, what to do?

Well, several things, but let’s start by recalibrating your expectations. Against all the evidence, we tend to believe that all successful authors write really well: far better than we do. But do they? Let’s find out!

Who’s the Imposter Now? Check out the Bottom of the Amazon Top 100 List

It’s time to take a look at successful books in your niche and see how good the worst of them are. You can do this for free with the Search Inside the Book or Kindle Free Sample features.

Amazon keeps a Top 100 List for everything, including your niche. I’ll use my teen space-opera novel, One Survivor, as an example. 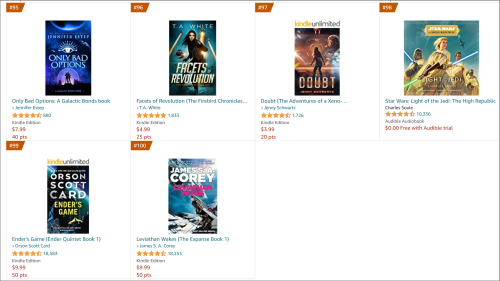 Anyway, this exercise will show you that even best-selling authors have feet of clay. You’ll find mistakes in their work, and sometimes boneheaded ones. Their work isn’t perfect. No one’s is.

So who’s the imposter now?

And yet, all these authors have thousands of satisfied, even enthusiastic readers. Which means … what, exactly?

If you look at the other end of the Top 100, things are better, of course, but not that much better. It’s a funny old world.

Once you grasp the minimum standards for success, your task is to consistently exceed this, at least by a little. This is a very different task from dethroning Hemingway, and infinitely more achievable. That’s where you start. That’s where we all start. Don’t try to dethrone the masters while you’re still an apprentice. Trying will make you feel like an imposter.

Notice, too, that craft goals and sales goals are two different things. My medium-term sales goal is to become a solid B-list writer with a satisfyingly large fan base and the ability to land contracts from traditional publishers more or less at will. I’m not there yet. (A-list writers are usually B-list writers who suddenly strike the public’s fancy and have a hit for no obvious reason.)

My current craft goal is more modest: write new stories that are like my old ones, only more so. I don’t plan to do anything revolutionary with my style anytime soon.

What Does it Mean to Be a Writer?

Another thing that stirs up imposter syndrome is the belief that “being a writer” is a thing; that writers are a different kind of being.

Which reminds me of this exchange:

F. SCOTT FITZGERALD: You know, the rich are different from you and me.

If you believe that a writer is not a mere mortal, but a different kind of being; that to be a writer, you have to become someone else, like a beautiful caterpillar turning into an ugly moth; I have news for you: You’ve fallen for centuries of shameless self-promotion. It ain’t so.

Which is probably just as well. Instead of having to become a bad imitation of The Ideal Writer, you get to be you, but with ever-increasing writing skills.

Writers are different from other people because they write and other people don’t. That doesn’t mean a given writer is intelligent, insightful, talented, creative, or even sanitary. Many aren’t.

It’s uncomfortable to be up on that high pedestal, and I recommend that you not go there. Recognize that the relentless self-promotion in the “glamour industries” makes people nuts. Don’t be nuts.

So go forth and write like the real you. Writing as yourself, using the skills you currently have, and about as well as you know how, is something anyone else would have to fake, but for you, it’s the real thing.